skip to main | skip to sidebar

Chris Zabriskie: O Great Queen Electric, What Do You Have Waiting For Me? (2008) 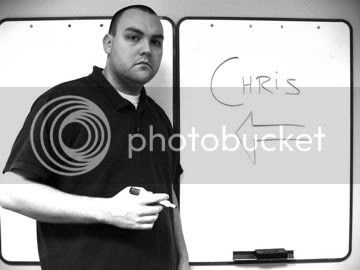 First of all, is this really Chris, a writer for RetroLowFi? Most know Chris as the writer who tends to make lots of big statements in his hatred for certain films and bands (most notably My Chemical Romance and sadly Death Proof), but he also writes eloquent praises (most notably for the films Psycho II and Danny Boyle’s Sunshine). Either way he is a man in my mind who voices his opinions loud and proud, but on O Great Queen Electric, What Do You Have Waiting For Me? Chris sounds tender, focused and triumphant.

The album blazes its way quite easily with “I Can Be Your Love,” which has one of the coolest hooks to sing along to I have heard in awhile. I catch myself doing it in the shower, on the way to class and even right now as I’m listening to it. The song reminds me of a kind of noise-pop/electronica hybrid as the fuzz is slowly taken over by electronic warble.

O Great Queen Electric... starts out quite raucous and you could say it loses energy as it moves along, but the more I listen the more the latter half also strikes me as being as beautiful if not more moving than the first half. “God’s Will” is played tensely on acoustic guitars with Chris’s hushed vocals echoing melancholic religious apathies, “leave them now/they’re happy where they are/leave them now/they’ll watch you from afar.” And when the lone piano comes in the song (and your heart) hits the breaking point. The album’s weight shifts dramatically.

And throughout the album, Chris’s simple, but perfect orchestration of each song allows not one wasted note. On “If Only She Knew,” a simple acoustic guitar provides the backing to his yearning voice. The song comes to a perfect crescendo with a little gap of silence and then after a few seconds, he double tracks the vocals. This twofold attack perfectly fulfills the kind of reaction we would have in this kind of situation where all we want to do is scream out, “If only she knew/the things that I do.”

I find myself falling harder and harder for this album. It also makes me rethink Mr. Zabriskie too. At first I was turned off by his abrasive style of writing, but with O Great Queen Electric, What Do You Have Waiting For Me? I see a bigger and grander picture of a passionate individual so fueled by his artistic intake that he’s bursting at the seams to let it all out. This album is a disciplined, mature and joyful look into what makes Chris tick and how he reacts to this crazy world. I think if I ever get brave enough to read his negative review of Children of Men I’ll listen to “God’s Will” to understand why.

Links:
Chris Zabriskie on myspace
Preorder O Great Queen Electric, What Do You Have Waiting For Me? on his website
RetroLowFi
Posted by Steven Ray Morris at 1:15 PM

I am a filmmaker, musician and student at UCSB. This little blog is all about love. This is love of music, film, books, art, and just plain confusion in general. Lo-fi music is always welcome! Beards too! Want me to review your music/film/art? Let me know, I'd love to hear/watch it! If you noticed, my reviews tend to go pretty in-depth so if you send me an entire album it'd be much easier to write something super cool!

If you would like to send me something to review just drop me a line:

Note: Due to the high amount of submissions I primarily only review works if sent as hard copy in the mail.

You should always support music and artists (Lo-Fi or otherwise), but I do love posting an mp3 or two to give a taste. If you don't want your music up just let me know and I'll remove it. Thanks!